How to give prompts ? Prompting strategies Print

Any new learning can be quite overwhelming for the user. Any user can benefit from prompting, regardless of age, communication skills, or cognitive ability.  Prompts can be used to assist the user in successfully learning to perform a task - it is a method of guiding the user to give the correct response. If you don’t prompt, the user will continue an incorrect behaviour, and the motivation to learn will decrease.

What is a prompt?

A prompt is a cue or instruction that is given before or during a user's action or response. There are different types of prompts that you can use to motivate the user to learn and succeed. 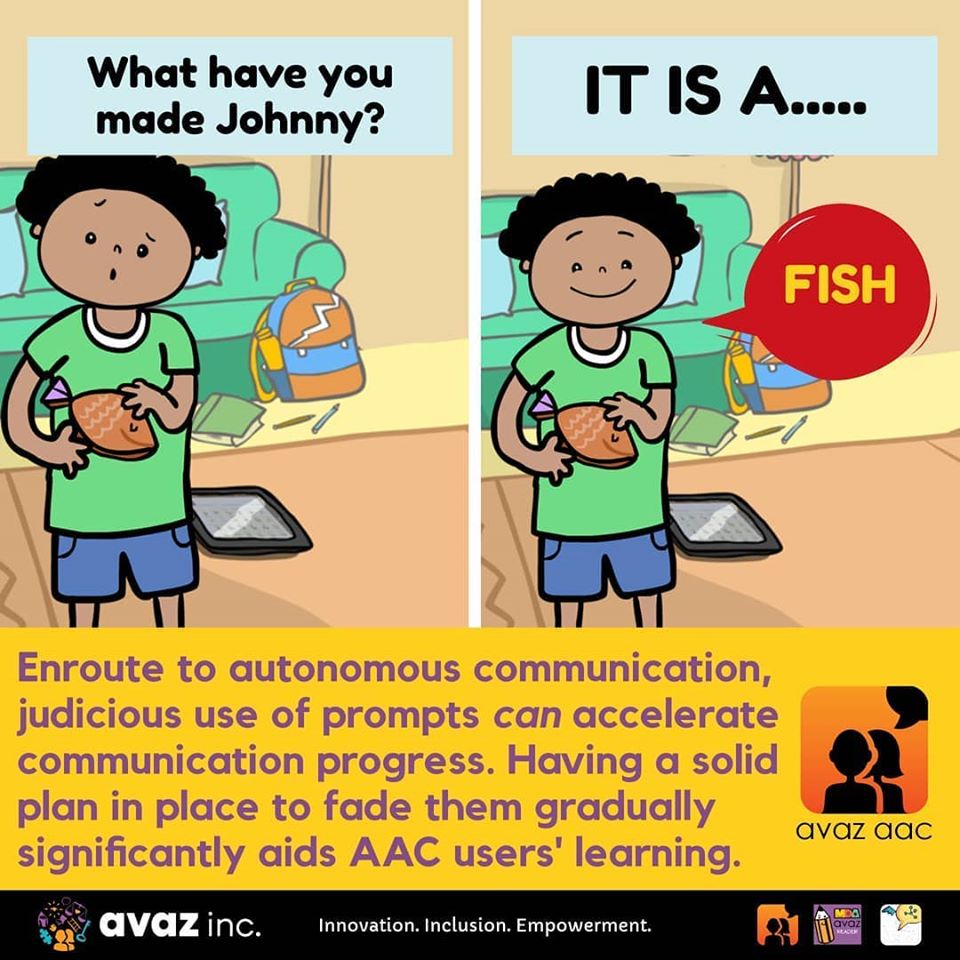 What are the different types of prompts?

There are different types of prompts. For example:

Verbal prompts, such as saying “Tap the picture of popcorn!”

Gestural prompts, such as pointing to an appropriate icon on Avaz to remind them to use it.

Physical promptingPhysical prompting involves taking the user’s hand and making them point to the appropriate icon. However, recent research doesn't support physical prompting as it is quite difficult to fade it away. Besides, it makes the user believe that they have no say in the communication and need to go by what the partner is making them do. Physical prompting includes hand-under-hand (which is better recommended compared to hand-over-hand, as it can be more easily faded. Physical prompting is less helpful and using them is not really advocated and it is extremely culturally sensitive (and it does not support safe practices that are important to protect vulnerability)

Though prompts are very useful in teaching a new concept and working on the use of it, it is also important to use them carefully. Users become dependent on prompts easily and  would seek an adult's or partner’s help before they make any type of response. Research suggests the hierarchy of least-to-most prompting as it provides the user sufficient time to respond to a natural stimulus occurring in the environment. Prompting hierarchy refers to the order and different levels of support that can be used to help the user get the appropriate responses. Remember, as you decide the type of prompts you also need to think of ways to fade prompts over time. Regardless of how often we provide prompts or what type of prompts we provide, providing a model of the possible words suitable in the conversation is considered the most useful strategy we can use.

Let us look at various prompts ranging from least intrusive to most intrusive with encouraging  the user to use the word ‘GO’ to make the car go.

If the user responds (using any mode of communication), acknowledge and respond immediately - How to respond when the user attempts to communicate?

If the user does not respond, move through the next prompt in the hierarchy and WAIT for the response after allowing the indicated wait time. 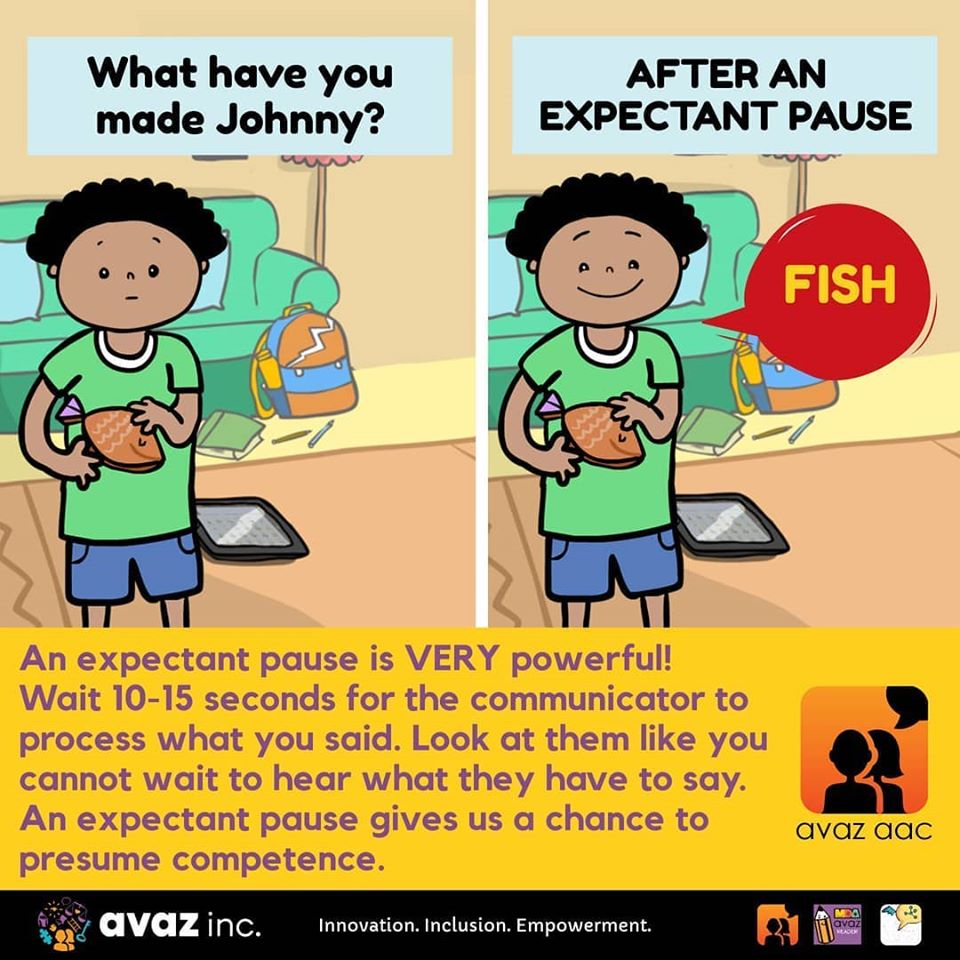 What is Prompt dependence?

This occurs when a user needs (depends on) prompts in order to respond. In many cases a user is accidentally taught to wait for a certain prompt before responding.

Some reasons for prompt dependency are:

If the user doesn’t respond, give the next prompt in the hierarchy and WAIT for the response.  If you don’t use enough wait time, you may be providing more prompts than needed. Remember, rushing through prompts essentially takes away opportunities for the user to respond. Inappropriate prompting can result in prompt dependence, passive engagement, and of course poor use of communication tools. Hence it is very important to start fading prompts gradually but consistently so that the user doesn’t become dependent on the prompts. Start with the one that is most appropriate for the user, but regardless of the prompt used, work towards making your user independent of the prompt. Fade each type of prompt until the user is able to respond independently, without any prompts.

Courtesy: This section is compiled based on information provided by Octave Speech and Hearing, Bangalore. 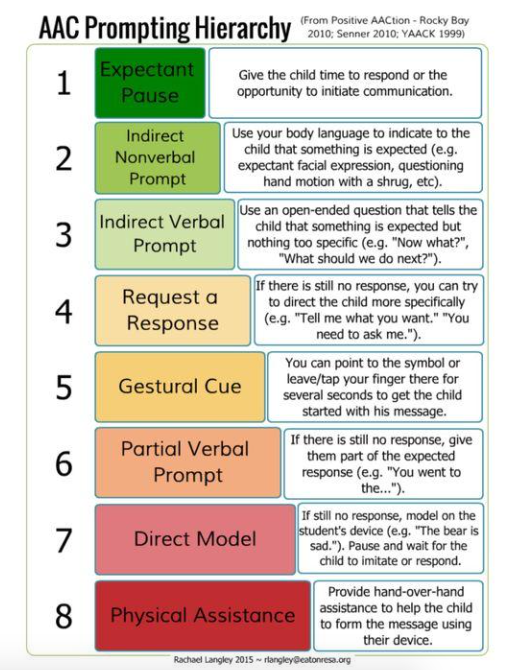