MY EXPERIENCES WITH AVAZ

I'm a speech pathologist working with language disordered children for the past 9 years. The break through in  technology has  helped the language disordered children  to communicate beyond the sensorial and organic deficits. AVAZ  app an AAC device  is one of its kind that  has done  great wonders bridging the communication needs of these children. With the  right assistance they   swim  into water like fish as you introduce them to Avaz. Their frustrations of not being able to communicate what they need, reduces tremendously, there by improving the intent to communicate.

When I started working with some of my nonverbal autistic children, I saw them developing speech with ease that they don't realize they have started to talk. .It has been a tool to stimulate speech and it is a different medium to instill the interest in them.

The speciality of AVAZ having regional languages and their significant food with reference to Indian  context.  Also it features personal  customization which yields a great hand in tailoring the communication needs suitable for each child.

These are the  strategies that I have been using with children

1.PICTURE IDENTIFICATION:  this involves identification of pictures to build vocabulary which can be done with flash cards.

2.TRANSFER: transfer of the picture identification in AVAZ using  2 or 3pictures per screen and   get the child to touch as you say it

3.LABELING: Now show  the child an object and ask WHAT IS THIS? As u press the symbols and the child  has  to touch the right object. This establishes responding to questions.

4.TAKE TURNS: As she responds to your questions, you take turns by saying GOOD JOB in AVAZ

5.INTRO TO WANTS : Make folder with significant needs of the child ranging from her favourite  soft toy or wheel of the toy car, bubbles, favorite food to water and toilet. Display her favourite toy, food in vicinity  and ask WHAT DO YOU WANT? Make her touch the pic what she would like to have. Gradually the child will be able to develop to communicate her needs.

6.INTRO  TO CONVERSATION:  once the child is familiar with taking turns in responding you can start conversations with “HI, GOOD MORNING…..WHERE IS MAMA…. WHAT IS THIS….GOODBYE”show her action pictures in books, cards  and touch the symbols respectively

Then on we can add more vocabulary as per their needs, as well verbal concepts that they have to master. Giving commands through AVAZ  and verbally will enable the child  to  follow commands. In AVAZ  also, expanding the language is similar to conventional speech therapy by telling them stories and getting them to reply back the questions.

To conclude for a SLP, AVAZ  is a very important  tool that not only acts like AAC but also as a handy tool to evaluate and facilitate a child in a visual mode. 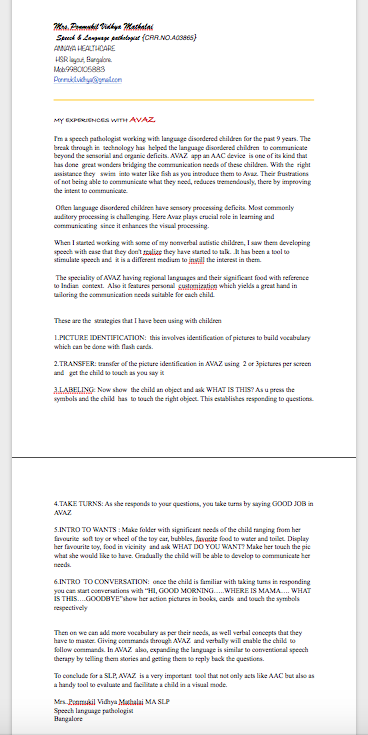